The Slime of Slugs

Covid-19 moves like a corpulent slug,
Depositing eggs along an invisible slime trail.
Odorless and colorless, the slug slides among us, leaving no detectable
Evidence of its passage.
I wish we could see its fuchsia scent,
Taste its slimy tolling,
Or touch its loathsome flavor,
Anything to warn us of its presence.

Too late, we do respond,
We do detect its trail,
But not until it has its way with us:
Cancelling a graduation, postponing a tennis tournament,
And eliminating our jobs.
A million eggs have hatched,
A million offspring
Gunging their way across Planet Earth.
With the barest trace of their ooze
They are felling playwrights, actors, political figures:
McNally, Bosé, Libyan Prime Minister Mahmoud Jibril,
And your best friend’s grandma.

Exasperation boils through when someone,
Unable to detect the slugs themselves,
Blames some group they revile
For invoking God’s wrath,
“Them _____s have brought this on us all.
They are the flaming swords of Satan’s shadow.
Satan has shown me the light;
His presence has been made known!”

Now I am the soothsayer;
She sees a vision of the world to come.
She divines the fate of those who curse.
She recognizes that this miraculous pestilence
Will show them truths.
Even they will join us.
We shall start anew in a compassionate world.
Volveremos a nacer con compasión.
“We rail against your ring of love,”
Curse the slugs,
Shriveling beneath the salt of tears
Shed in their murderous wake.
Tender as newborns,
We thread our lives together,
Awakened to the web of life necessary
To sustain us all. 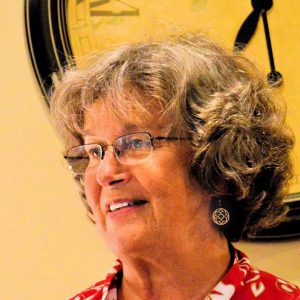 Carol McMillan is an anthropologist and author from the United States. She lives in Hawaii with two naughty cats, where she currently serves as president of the Hawaii Writers Guild. Her upcoming memoir, Scriptless, recounts the critical years of the late sixties in the San Francisco Bay Area, as experienced through Carol’s life during her early twenties.